Last weekend, I, together with two kids, were able to try a new foodie place that opened just this month. You see, I'm such a sucker for anything crispy and have been craving for that Ilocos specialty called "bagnet" - pork deep-fried till the skin gets a nice crisp that one eats after dipping in vinegar (spicy, please!). Thus, when I learned that a restaurant whose specialty is bagnet had just opened up in Quezon City, I didn't waste much time and hauled
ourselves off at once!
This new place said to offer ticket to porcine heaven is called Manong's Bagnet Station - a simple, unassuming restaurant which I found out, serves really mean bagnet - a haven indeed for pork lovers! All three dishes we ordered were made from bagnet and all of them were so good! Take a look at what two of my kids and I partook of for a late lunch: 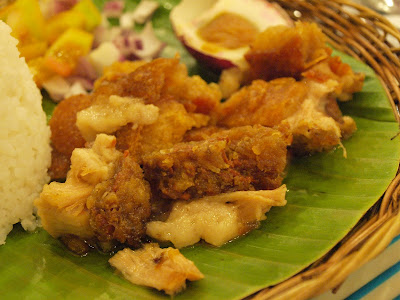 My bagnet rice meal didn't disappoint. On the contrary, I was impressed! You should hear that crack whenever I would bite into the skin that was so crispy I was eating noisily! Haha! I also took spoonfuls of my kids' sinigang na bagnet and bagnet sisig. I'm not kidding you, both were really delicious as well. The next day, my daughter was still daydreaming about Manong's Bagnet Station, planning to order bagnet kare-kare next time. By the way, although this restaurant had just opened, it's not really a new kid on the block in the food business as it has been a weekend market favorite for quite some time.
Manong's Bagnet Station is at 117A Scout Lozano corner Tomas Morato, just next (or behind) to Alba Restaurant in Quezon City.
Posted by Lori P. at 10:41 PM No comments:

Eating out for breakfast is a luxury for me since I'm a late riser and rarely do I leave the house in the a.m. (I go to work at noontime, too.). Today is one of those rare occasions. I had an errand so I had to get up earlier than usual and head over to QC, tagging along my daughter. And we didn't pass up the chance to have breakfast at McDonald's if only for their hash brown and sausage! Yummy! At this branch at the corner of Mindanao and North Avenues, there's McCafe, too, so we were able to get "specialty coffee" - cappuccino for me, cafe latte for my daughter. I went for a hotcake and sausage meal plus hash brown (P102), while my daughter had Big Breakfast consisting of rice with sausage and fried egg plus hash brown (P121). We added P40 to each order to upgrade our drinks to cappuccino and cafe latte.
Breakfasts such as this on a sunny day indeed make for a happy morning. :-)
By the way, we're on the last days of summer for this year, so go out into the sun for a few good minutes for that healthful dose of Vitamin D! Have a blessed week ahead! 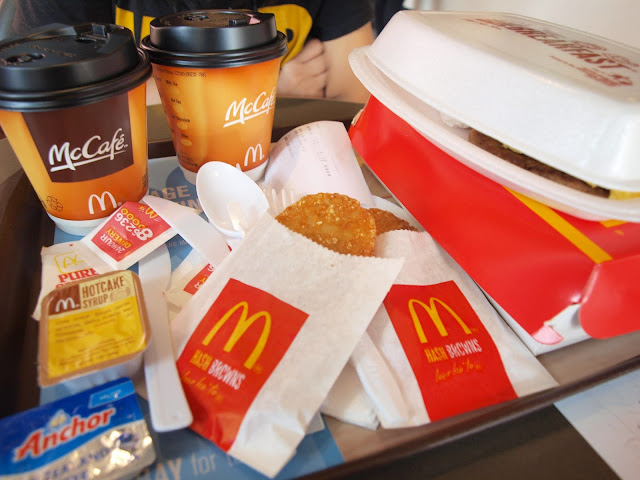