Cicada song: The enthralling sound of the night


I love nature. I am such a sucker for the sea, sun, trees and animals. This is one-third of the reason I so love my hometown of San Francisco in Quezon Province. My parents who live there comprise the other third, and food, glorious food, make up the remaining third part. Whenever I end a vacation in our small, sleepy town (the townsfolk go to bed early at night) and head back to Manila, I always bring with me part of what I had enjoyed in San Francisco - food, of course, usually consisting of locally dried fish (daing), my mom's tocino and longganisa, and fruits, usually indian mangoes and lakatan bananas from my folks' backyard, plus seashells that I always gather at the beach, and once, a rooster which I'd kept as pet. These things keep me happy until my next visit to San Francisco (the food till supply lasts, of course) . In our home here in the big city, I love looking at these things because they invoke the happy feeling of rural life, which I always dream of living for good. And then, last Saturday, there was this occurrence that unexpectedly added to that feeling - the "singing" of a cicada or kuliglig right in our small garden. What a pleasant surprise! I'd lived in this house for over four decades and this was the first time a cicada visited our yard. I just love hearing this insect's "song", which other people might find annoying. It sort of transports me to another world where the night is at its blackest and cloaked by mystery. Moreso, it makes me relive moments of vacationing in my hometown, where this is the sound of the night, along with the croak of the frogs, and the vocalization of the geckos. I knew it was fate that made me get up and go out of the bedroom at 1 a.m. to hear the cicada. Haha! Of course, I did not pass up the chance to record that "song" in my cellphone.

The cicada is such an interesting insect. According to the Animal Planet website,

"The cicada's claim to fame is its singing. The high-pitched song is actually a mating call belted out by males. Each species has its own distinctive song that only attracts females of its own kind. This allows several different species to coexist.
Cicadas are the only insects capable of producing such a unique and loud sound. Some larger species can produce a call in excess of 120 decibels at close range. This is approaching the pain threshold of the human ear! Smaller species sing in such a high pitch that it cannot be heard by humans, but may cause dogsand other animals to howl in pain.
The apparatus used by cicadas for singing is complex. The organs that produce sound are called tymbals. Tymbals are a pair of ribbed membranes at the base of the abdomen. The cicada sings by contracting the internal tymbal muscles. This causes the membranes to buckle inward, producing a distinct sound. When these muscles relax, the tymbals pop back to their original position. Scientists still don't fully understand how this apparatus produces such extreme volume."

After that night (early morning, actually), it took five days before I and the rest of the family heard the cicada again. The first time, it was just me and my teenage son who heard it because the rest of the people in the household were already asleep. Last night, everyone did because it started its "singing" early into the night. My hubby, upon coming home from work and hearing the cicada, went straight to the backdoor, thinking the door alarm was activated. Haha! He too, expressed surprise and delight that there was a "kuliglig" in our garden. I guess it will now be a nightly habit for us to wait for the mesmerizing cicada "song".
Posted by Lori P. at 12:11 AM No comments: 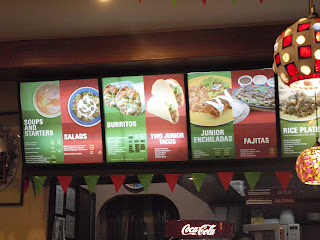 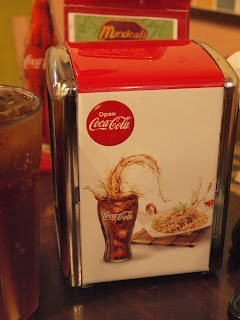 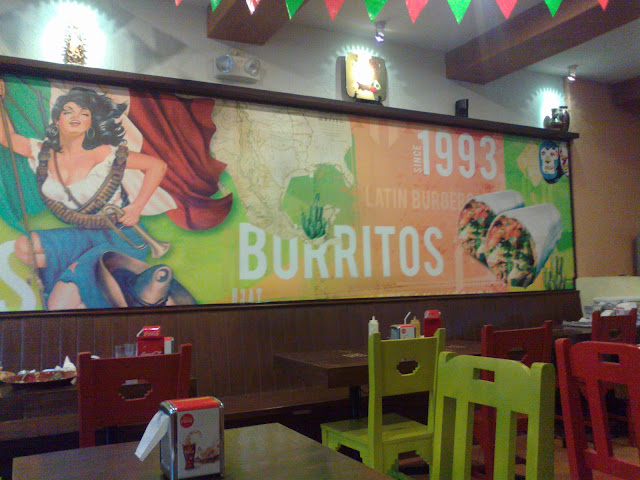 Last Sunday, my daughter and I were at SM City San Lazaro to buy some stuff. As we went hungry after going halfway through our errands, we mulled over and debated for a good few minutes whether to go Japanese at Tokyo Tokyo or Mexican at Mexicali. We were discussing in front of Mexicali, however, so it easily won for the both of us. This place offers a nice, laid-back ambiance with the marriage of vibrant wall and chair colors with subdued lighting. My daughter and I both went for combo meals. Burrito and Taco plate for her, Taco and Quesadillas plate for me. Both came with a glass of iced tea. My daughter ordered fries as well. The taco was good enough (I love any taco!) and so were my Cheese and Garlic Quesadillas. According to the server, the latter is their best-selling Quesadilla. They offer other variants of this Mexican sandwich such as Jalapeno and Cheese, Ground Beef, Roast Pork and Grilled Chicken. As to the fries, they were large-cut and tasty, especially when dipped in the orangey sauce that came with it. Even the iced tea was good, refreshing and served in a somewhat large glass so there was more than enough to drink for me. The disappointment came, however, with the burrito. It sorely lacked filling such that you could almost count the morsels of meat. It was so wanting in flavor, which to me was not justified, considering the price (it's steeper here compared to Taco Bell's). I guess I won't be going Mexican again when at SM City San Lazaro, unless of course, the call of the taco grows too loud to ignore. Haha!
Posted by Lori P. at 10:21 PM No comments: