Have you ever tried buying coupons from group-buying sites? Well, I've become a huge fan of those sites and I purchase vouchers for dining and personal items. The beauty about the deals they offer is that they not only allow me to save on money, they also "educate" me
on new foodie places to try.
One of such new discoveries for me is Azucar Boulangerie and Pattiserie in New Manila. Had I not seen it in a deal offer, I wouldn't have learned there's one gem of a coffee shop on Doña Hemady St. outside Robinson's Magnolia. This cafe is really new, just four months old. My daughter and I were there just before worship service last Saturday for an afternoon meal and what a delightful meal it was. This small, neighborhood cafe offers awesome coffee, rice meals, pasta and pastries. Really nice place for a chat with friends and family. Better still, get some munchies to take home. They offer an assortment of breads, cakes and cupcakes.
We had: 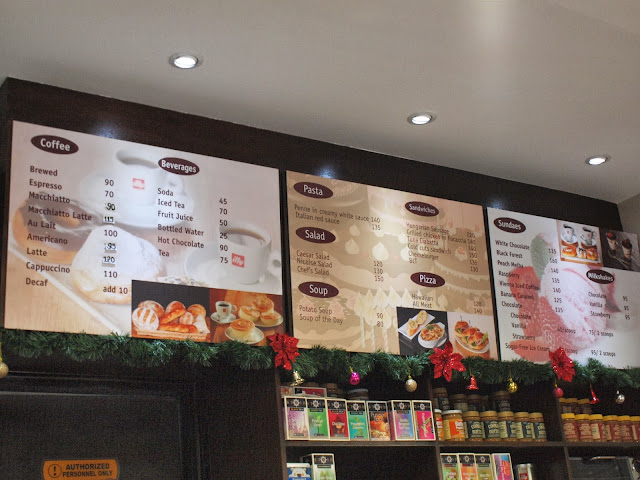 My Chicken Longganisa was good - very tender and tasty. Even yummier when dipped in vinegar. I just wished it came with fried rice instead of plain steamed rice. I really love sinangag, that's why, and those all-day breakfasts. Meanwhile, my daughter loved her Penne Carbonara. I ate some of it and agreed. It was creamy, meaty and cheesy. I had disappointment with my Red Velvet cake, however. It was dry and coarse. I complained about it to the woman at the counter and she offered to warm it in the oven. Good idea 'coz I liked it the second time as it was now moist and soft and it had just the right sweetness. My daughter's Almond Slice, on the other hand, was like Sans Rival in texture. Quite good too. But it was the coffee that really made my day. I thought it was pricey at P90 per cup (Starbucks price?) but hey, it was worth it. It was full-flavored and strong but not too much as to give you palpitations. It definitely had the taste that would make you want to come back for it.
By the way, the Illy print on their cups got me confused. It made me think Azucar is owned by the same people behind Espressamente Illy at Shangri-La Mall. But the woman at the counter explained to me that Illy is actually the brand of the coffee beans that they use, which come all the way from Europe. Wow! No wonder it's great-tasting and pricey! That said, there's life outside Robinson's Magnolia after all. :-)