Of all the meals I get to eat in a day (we Filipinos have at least 4 meals a day, right?), breakfast has got to be the most important. I never leave the house without having had breakfast unless I expect to be served it where I'm heading. It's the one meal I want to have peacefully, unhurriedly and preferably in our small garden where it's cool and where I have the company of plants and trees and on lucky days, butterflies. Well, what better way to start the day than with a nice, huge brekkie while enjoying nature, right? And what's my favorite breakfast, you might ask? It's tuyosilog - tuyo (dried fish), sinangag (fried rice) at itlog (fried egg). Daing (another type of dried fish) can take the place of tuyo but the latter is my ultimate favorite. I'm not very fond of American breakfast fares because in our household, processed meat is not eaten regularly for health reasons. Can you please share with me what your favorite breakfast is? I'd love to hear from you.
Posted by Lori P. at 12:13 PM 2 comments: 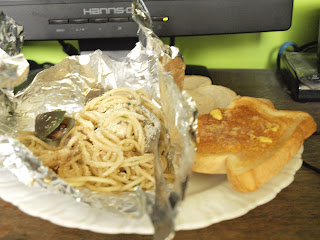 Obviously, I'm having breakfast by the computer. Haha! On my plate are seafood pasta, which hubby brought home last night from Galileo Enoteca restaurant, and two slices of buttered toast. Truth is, I rarely have brekkie in front of the computer, as I prefer eating in my little garden, where the cool breeze whets my appetite - as if I need that! Haha! On my next post, I will share pictures of breakfasts I have had in the garden. But for now, I hope you could share what you're having to break the night's fast. Have a nice day!
Posted by Lori P. at 10:52 AM 3 comments: 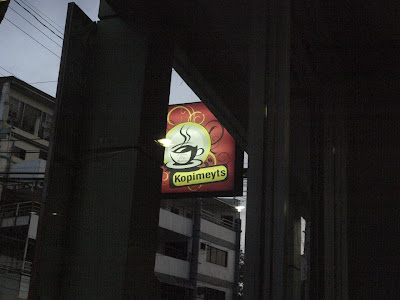 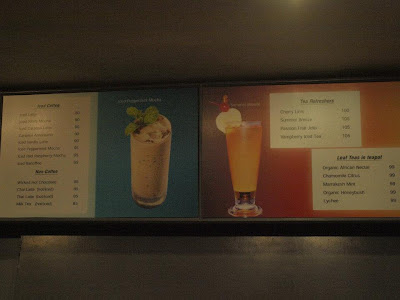 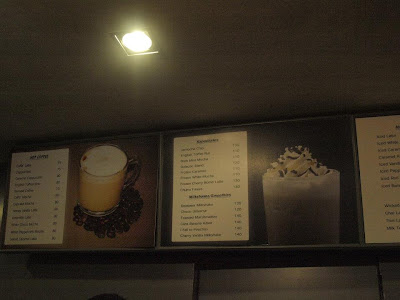 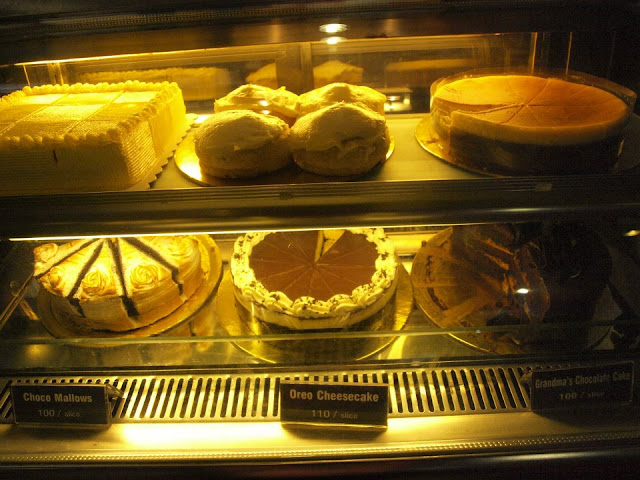 There wasn't a single coffeehouse in the vicinity of our office along Visayas Ave. in Diliman, Quezon City till Kopimeyts was established last year. So one day, one of my closest friends at work and I jumped at the chance of spending our coffee break there. Since then, I'd been at Kopimeyts a couple of times, with  different company on each occasion. I loved their Tapsilog, a breakfast fare which you could order here anytime of the day. At P100., it already came with brewed coffee. Not bad, you might say. However, I loved their baked carbonara even more. They used penne pasta, which surprised me the first time I ordered it, since most restaurants use spaghetti noodles for this particular dish. At Kopimeyts, baked carbonara was heavenly. It had just the right creaminess. Hindi nakakasawa. Yum! It came with a halved slice of toasted garlicky tasty bread - a plus point for me since pasta is lonely food without garlic bread, don't you just think so? Just before I embarked on a joyful three-and-a-half-week vacation last May, I took two of my kids to work and to Kopimeyts and they too loved the baked carbonara. But when I reported back to work, I found out Kopimeyts was no more, to my dismay! A salon is now in its place. Oh darn, no coffee shop in the neighborhood again! Now all I have are coffee and baked carbonara memories. Sigh!

It was palengke day on Sunday so I hied off to the Quezon Memorial Circle with my daughter to get the organic vegetables which I had called to reserve for (I buy our veggies for the week at AANI, a store owned by farmers practicing organic agriculture, who sell their produce at the QC Circle). Earlier on, I had planned to dine at Serye Cafe Filipino across the Quezon City Hall since we would be in that area. I have long heard about Serye but haven't had the chance to go there. I had known about it at work. Whenever there were big events in the country like the President would deliver his/her SONA (state of the nation address), bigwigs would gather at Serye and we would deploy one or two of our reporters there. But now my daughter and I were finally here to eat. 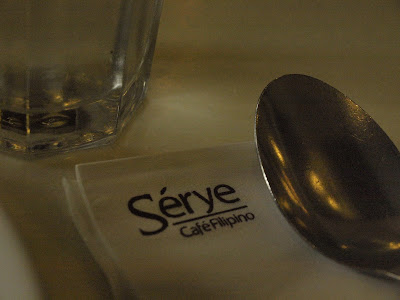 It was nearly 3 p.m. We hadn't had lunch yet but because we had late breakfast (brunch?) and ate cornic on the way to QC, we weren't hungry at all. Still, we had to have lunch so after browsing through the menu, we ordered:


Everything was good but nothing spectacular (at least at this point). The Pancit Miki Bijon was even a bit bland to me. The hefty serving was a plus point, though. What we ordered for was the solo size but we found out it was good enough for 2 persons who are not very hungry. It also came with buttered toasted pandesal. The Boneless Chicken Barbecue was delish, okay, and my daughter liked the sauce that came with it which was nutty and sweet. The pork barbecue, however, tasted ordinary and my daughter and I agreed that the ones we buy in the neighborhood are better (promise! that's at P15 per stick). The java rice that came with the barbecue duo was yummy as well, and so was the achara. And then came our coffee and choice of dessert - the Decadent Chocolate Cake with Caramel Sauce. It was moist, soft and delicious but for me, a tad too sweet. I originally wanted another kind of chocolate cake as I thought about a slice from Serye that hubby brought home one night. I've been thinking about that cake! I thought I ordered the same one but a different kind came to our table. Was I disappointed! But since it was already served, we settled for this one. It was okay na din although as I said, a little bit too sweet. But the coffee.. oh, the coffee! I forgot to mention that it was what I came to Serye for. I read that they serve siphon-brewed coffee, which they say, tastes more divine than regular brewed coffee. It was so sayang that I wasn't able to take a picture of the waiter pouring coffee from that siphon-brewing equipment that they use, into our cups. For those who don't know about the process of siphon-brewing coffee, sorry, i'm not explaining here because I haven't comprehended it. Haha! It looks complex to me. But I tell you, the resulting flavor is really good and strong! What added to my pleasure of coffee-drinking here was that it was coco sugar that came with it, which is healthy! If only for this coffee, yes, I will come back to Serye. They said the Boneless Crispy Pata here is so good, so might as well try that next time. And yes, I'll make sure to order the right cake!
Posted by Lori P. at 2:04 PM No comments: