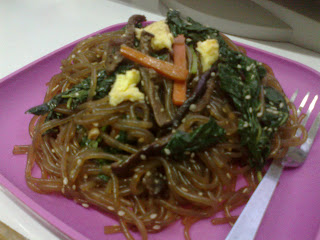 On Wednesday last week, I had the pleasure of having as my office lunch quite a special dish courtesy of my coworker-friend. It was Chapchae (also Jap Chae) - Korea's version of Filipinos' beloved Pancit Bijon. I say it's quite special because it's not an everyday type of dish. Why? Because one, its ingredients are on the expensive side and two, cooking it can be tedious as it is done in several steps. Consider this: glass noodles which are used in this recipe, are priced at around P200 per kilo (Bijon, I think can be bought at around P80 per kilo). Chapchae doesn't use chicken or pork, it's beef and we know this is the more expensive meat. And then there's shiitake mushrooms and spinach, which are not ordinary veggies for most Filipino households. For the cooking oil, you use sesame oil and in some recipes, olive oil as well. If you haven't eaten Chapchae and you want to try it, you can find it at BonChon and probably in most Korean restaurants, which now abound in Metro Manila, thanks to Super Junior and those cheeky Koreanovelas (which I love!). Well, I haven't tasted BonChon's Chapchae yet but I'm eyeing to do just that real soon. Once, I bought an order of Chapchae at the Sidcor Sunday market in Centris, but it didn't quite measure up to my friend Leslie's cooking. I hope it's good at BonChon. If you want to learn how to cook Chapchae, I'm sharing a video here from YouTube. Happy cooking!

Circles Café: An afternoon at the park

It was a work and play Saturday for me and my youngest child. It was palengke day once again and I had to get our organic veggies for the week at the QC Memorial Circle, so I decided to have some fun whilst doing the chore. Fun, my son had (me too!), as I let him romp to his heart's content at the playground before picking up our veggies. This was, however, after we had a nice merienda at Circles Cafe, a quaint coffeehouse tucked into the bowels of the QC Memorial Circle. This side of the Circle was unfamiliar to me till we ate at Serye some two weeks ago. 'Twas good choosing to dine at Serye, it turned out, 'coz I discovered this side of the park, which is quieter than the playground side, where we'd gone picnicking a few times already. It was a major plus that there, too was a row of small eateries and coffee shops here that appealed to me because they looked cozy and quiet inside. Outside these establishments was even more appealing to me because there's a lot more greenery here than in the other side - more trees, more grass and more seats and tables where I imagined I would be reading a book while sipping coffee one day soon. But on this particular day, since I had a small guy with me, I could not, of course, just sit under a tree and read a book. I had to let him play and in exchange, he let me choose where we eat instead of at Jollibee or McDonalds, which are his usual choices. So, Circles Cafe, it was for the both of us. Looking at it from the outside, I thought it  was a "cute" coffeehouse and that it was cool and comfy there as it offered al fresco dining. At the entrance, there's this menu on a tarpaulin and the picture of pesto pasta appealed to my son. Inside, as I ran through the menu, I overheard the woman (I learned later that her name is Tess Garcolitos and that she's the owner of this cafe) telling another customer that their bestseller was the Vigan Longganisa and Lucban Longganisa meals. However, this was after I have ordered the Beef Tapa meal. Rowan, of course, went for the Spaghetti al Pesto. Minutes later, after having spoonfuls of my order, I realized it was wrong for me to say "Tapsilog" when I gave my order because what I was served was not sinangag (fried rice) but brown rice. I read the tarpaulin menu inside and yes, brown rice indeed it was. It was somewhat disappointing but I wasn't gonna fret, of course. After all, I was hungry and anyway, the tapa (beef) was good - well-seasoned and tender and I was happy with it. I asked my boy how his pesto was and he answered on the positive. However, as he went "deeper" into his food, he started tasting something "burnt' and refused to finish his pasta. Being the mom, I finished it for him, of course, and discovered that the "burnt" taste came from toasted garlic bits. This made me review my pesto recipe in my mind as I thought it didn't include garlic (Once I got home, I asked my daughter if she puts garlic in her pesto sauce and she said yes, only she doesn't saute or fry it, she just put it with the rest of ingredients in the blender). In truth, I liked the pesto here at Circles Cafe and  welcomed the nice twist that the toasted garlic offered, but you know how kids are. For dessert, the little guy and I shared a slice of Mango Cheesecake, which was good! My son liked it very much. As I paid for our food, I asked the woman who looked like the owner of the cafe if she was it indeed and she said "yes", and that the man who was there also serving customers was her hubby. She said that they opened Circles Cafe November last year. She asked my son if he liked his pasta but it was me who answered that he did, but not till he tasted the toasted garlic. Tess then asked the cook if she put toasted garlic in the pesto and when the woman affirmed she did, her boss told her not to put garlic next time if a child is ordering. Tess then apologized to my son, then, handed him some candies and Ben 10 stickers. My boy was delighted! Well, isn't that good service?. And yes, good food, too.
Posted by Lori P. at 11:08 PM No comments: