Chicken tops the list of my favorite food on this planet, be it fried, roasted, or..well, steamed. When I was in high school, my sister, Ate Lita, would sometimes bring us for dinner to Peacock Restaurant, which offered Chinese dishes and had branches in Makati, Greenhills and Century Park Sheraton Hotel. It was there on those occasions that I loved eating what they called White Chicken - steamed and with whole peanuts underneath. It was quite bland if eaten on its own, but tasted heavenly when dipped in ginger sauce.
About two years ago, I found a Hainanese Chicken recipe online and discovered it was the same thing as the White Chicken that I loved at the now defunct Peacock Restaurant. But though I got excited that the cooking procedure was simple and easy, I still haven't tried the recipe to this day. Hehe..Then last year (was it just last year?) , I saw several Hainanese Delights branches in malls and thought, "Now I can have White Chicken again." However, it was just last January that I actually did, at the new, lovely and spanking Robinsons Mall Magnolia in New Manila, Quezon City. My daughter AJ was with me and it was the perfect time to go malling as there was an after-Christmas sale everywhere! And as shopping gave us hunger pangs, we went searching for a place to eat and Hainanese Delights at the basement caught my eye. AJ agreed.
We had: 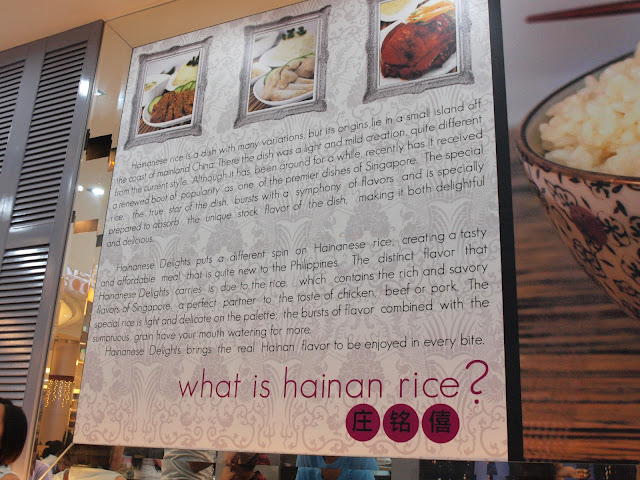 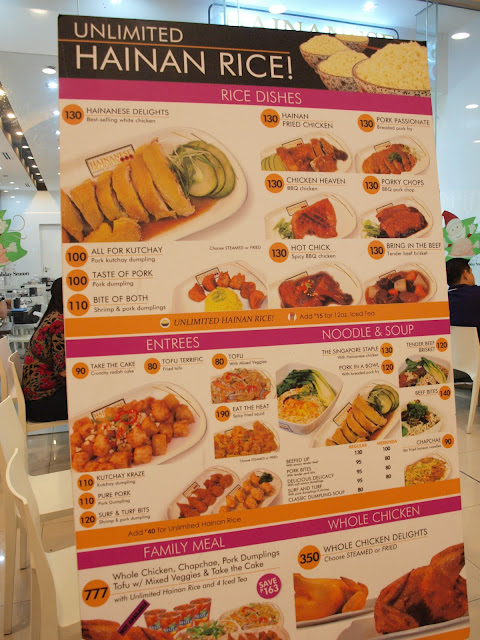 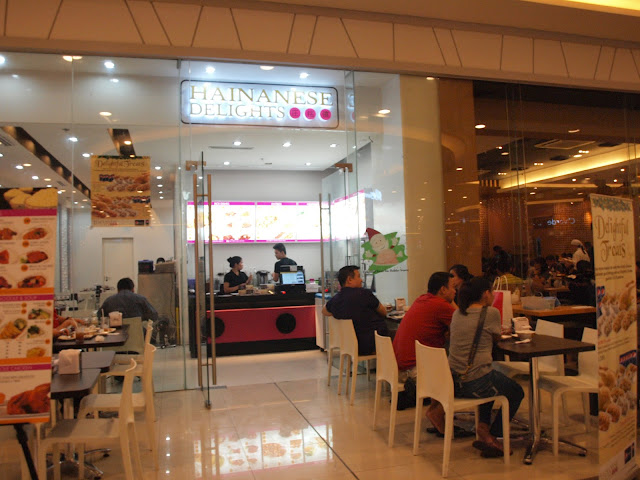 At first bite of my Hainanese Chicken, thoughts of "It must be love!" flooded my mind. Haha! It was that good! The chicken was very tender and oh-so-delish! with the ginger sauce. The serving size was quite impressive too, huh! Just one cup of the equally delicious Hainan Rice wasn't enough to finish the chicken so I asked the server for additional half a cup. (There goes the diet! Haha!) Meanwhile, I asked AJ how her Beef Brisket Noodles was and her answer was a lame "Okay". I took a spoonful of the soup and my verdict was the same: "Okay, yes.." Nothing fantastic. But my Hainanese Chicken was really great, I enjoyed it so much. For dessert, we had Strawberry Gelo-Tea, which was gelatin at the bottom and mousse at the top. It was well..okay as well, not the kind of dessert that you would go back a restaurant for. But hey, Hainanese Delights deserves a comeback for its delicious Hainanese Chicken.
Posted by Lori P. at 10:48 PM No comments:

My many favorites at Tropical Hut Hamburger

What is the oldest hamburger fast food chain in the Philippines? If you're thinking Jollibee, you haven't seen the light. Haha! While Jollibee was born in 1975, Tropical Hut Hamburger came to being more than a decade earlier or in 1962 (according to an article I read in the Internet). The first time I got to eat a Tropical Hut hamburger, it was the '70s and I was an elementary schoolgirl (That was before I first set foot at a Jollibee store). I remember thinking that burger from Tropical Hut was one of best things I'd eaten in my young life.
Today, over three decades later, I still think Tropical Hut's burger is one of the best tasting hamburgers in the country, especially among those served at popular fast food chains. But it's not just the burger that I love at Tropical Hut: There's their fried chicken and the sandwiches. How I love their clubhouse! The fried chicken has the same texture and crunch as Jollibee's famous Chickenjoy and in my opinion, as delicious, if not more. It was just yesterday that I last ate fried chicken at Tropical Hut and hours afterward, I was still daydreaming about it. Haha! Yum! Meanwhile, I love that they serve good brewed coffee all day-long.
Another thing I like about this fast food chain is that aside from the Westernized offers, they also have Filipino dishes like dinuguan and bistek tagalog rice meals that one could have for lunch and dinner, and palabok and beef mami for merienda. For dessert, they have halo-halo and mais con hielo, among others Tropical Hut has a wider range of dishes than other fast food chains and that's an advantage for it. The sad thing is that there are now fewer Tropical Hut stores in the metro. How I wish there could me more. The branch I frequent is the one at the Quezon City Memorial Circle.