Love the music, love the chicken

I mention Kenny Rogers to my kids and their eyes widen, roast chicken on their scheming minds. But say the name to my mom and most likely, she'll be singing "I will always love you". Hahaha! Truth is, both me and my mom love the music of Kenny Rogers.  But my kids don't know who in the world he is.  Surely, though, they know how yummy roast chicken is at this restaurant that bears his name, which the world-famous country singer co-founded (with former KFC owner John Y. Brown Jr.)  in 1991 . Ever since my children were small, Kenny Rogers Roasters has been our favorite family restaurant and we would always go for an order or two (when the kids got bigger and the youngest came) of a group meal consisting of one whole roast chicken, four cups of rice, four side dishes, four muffins and a pitcher of iced tea. However, it had been about three years since we last ate at Kenny Rogers so when I broached the idea to the hubby and kids one Saturday, not one opposed it as everyone had missed their roast chicken. So two roast chicken group meals we had for dinner at the new and lovely Robinson's Magnolia mall branch.  Our group of nine (with us were two of my nephews and my eldest daughter's beau)  had a nice, filling dinner. 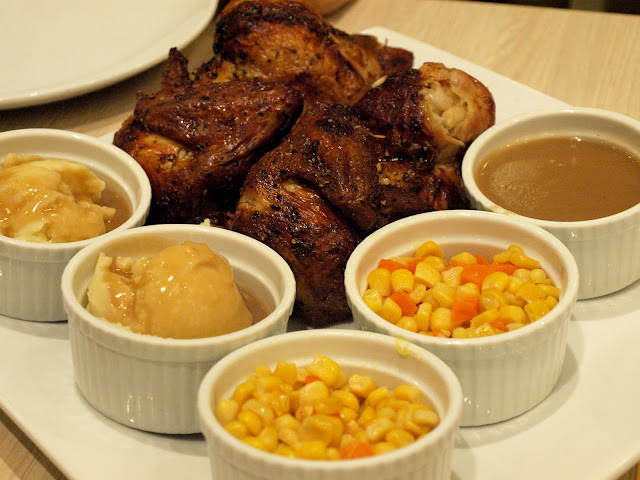 The roast chicken was as good as my taste buds remembered. For sides, we had corn and carrots, coleslaw, steamed vegetables, mashed potato and fresh fruit salad. Sweet ending was provided by muffins that came in four different flavors.
Meanwhile, more recently, I added Kenny Rogers Roasters to my list of to-go places for coffee after discovering that they now serve my poison. And they do have good latte! It's perfect with their sandwiches and pasta. My daughter and I dropped by another Saturday at Kenny Rogers Roasters - SM City Manila and had:
(I just used a point-and-shoot camera for the following pictures, thus, the paler colors.)

We loved everything especially the Bacon and Potato Salad. Yummy! Now we have added reasons to visit Kenny Rogers Roasters.