A week before my birthday this August, I met with one of my best buddies, who I haven’t seen for over a year. This guy, along with his wife, went through really tough times when he suffered a ruptured aneurysm in 2010 and went under the knife twice. It was only more than two weeks after we met up for my birthday treat that year that I received a text message from my friend's wife that he was in the hospital. The almost two months of hospitalization that followed was agonizing for the couple and the rest of their family and even us in their circle of friends. It is truly by God’s amazing grace that he has completed the travel on the long road to recovery.
Some two weeks ago, my friend’s wife texted me asking if we could meet up at Centris in Quezon City.  And so I jumped at the chance to see them.  At noontime, we were foursome not at Centris, however, but in Trinoma (my favorite mall and hangout place). My friend asked for my lunch venue suggestion and knowing that he hasn’t tried Taco Bell yet, I broached the idea, to which they agreed. By the way, there were four of us because the couple brought along their smart three-year-old kid, my godson. So, Taco Bell it was for lunch and we had:

I’ve satisfied my Mexican food cravings several times here at Taco Bell and walked away happy on all occasions. Food here is delicious and filling without burning a hole in the pocket. My companions this time liked it at Taco Bell, too.
For dessert, my friend’s wife asked me again for a suggestion. Without batting an eyelash, I answered “Dunkin Donuts,” because I have this undying love for their Blueberry Cheese premium donut. But as quickly as I gave that suggestion, my mind changed as I remembered admiring the Black Forest cake donut on display at Mister Donut one time. And so off we went there for coffee and donuts. My friends shunned coffee, though, and opted for the Mango Frostbite. I got a Black Forest, of course, while my friends had  Sansrival and Chocolate Mousse cake donuts plus a choco muffin. My brewed coffee was good! I've always liked it at both Dunkin Donuts and Mister Donut. The cake donuts were quite okay, except that my friend’s wife commented that they were really just like regular donuts just prettified.  I agreed. Yes, nothing spectacular about the cake donuts. Although they're not bad, they were way too sweet that you'd want to stop eating after three forkfuls.

Meanwhile. there were two other things (aside from coffee) I liked about the Mister Donut shop in Trinoma. One is the cozy ambiance and the other, the expanded menu. I was impressed that they now offer a penne pasta dish called Baked Cheese Tomato Penne and a burger steak rice meal. There's also a gourmet sandwich, the Chicken Burger with Chips, which looks yummy on the menu display. Next time, next time... 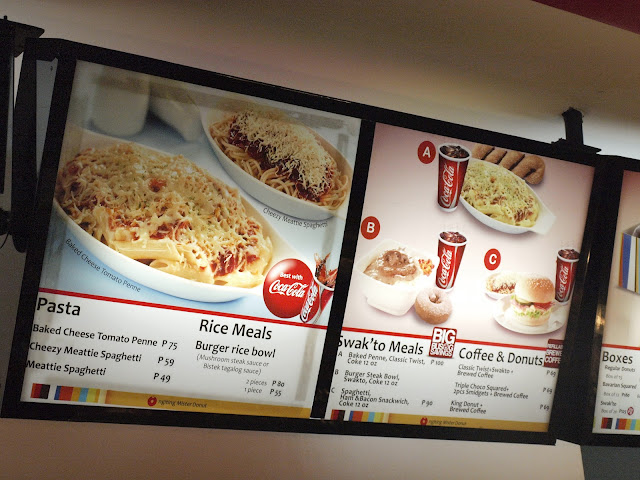 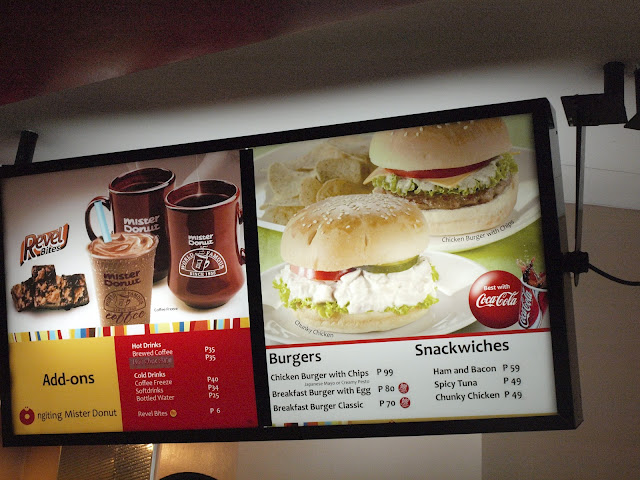 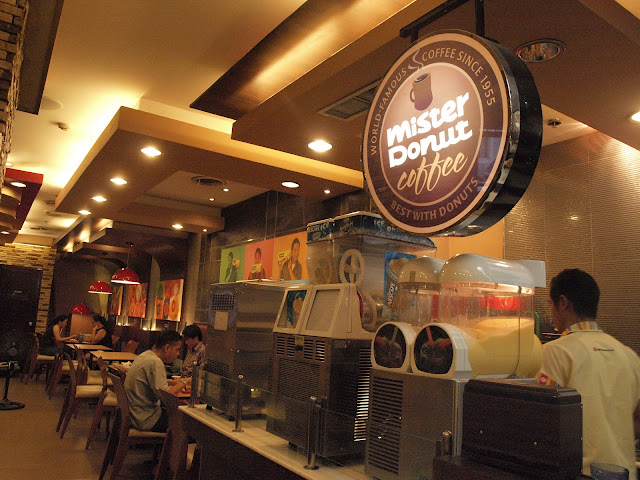 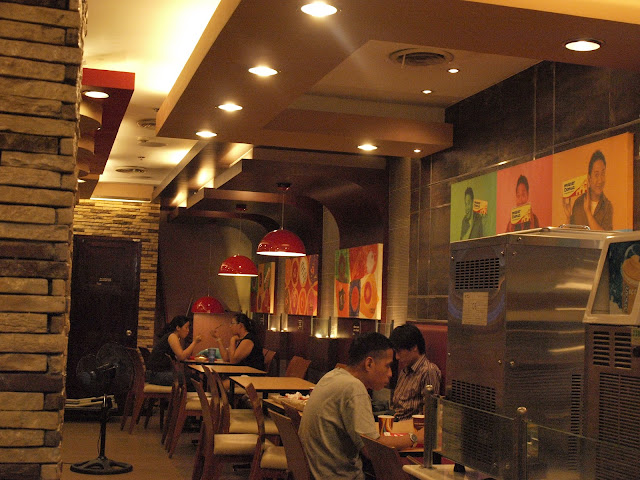 Anyway, it was time to go a little shopping after we were done at Mister Donut and not long afterwards, to go home. It was one great day I had with good friends, sharing good laughs and good food. :-)
Posted by Lori P. at 10:45 PM No comments:

I'm a simple eater with a huge appetite. Does that confuse you? Haha! Well, since I was a kid, I've always had a healthy appetite though my favorites come in a narrow range - Filipino dishes plus burgers and then a little Chinese when I got older (college). This was when my sister started bringing us quite often to the now long-closed Peacock Restaurant, a Chinese fine dining restaurant whose owners were her bosses. Then, one day in the '80s, my good friend from high school brought me to this Japanese restaurant and cajoled me to try one of those raw delicacies. I didn't like it, I even threw up, sorry. And I thought I'd never come to like Japanese food. More than 10 years later, however, I found myself working in a Japanese-owned company and it was then that I was reintroduced to Japanese food. This time, I liked everything that I tried, including the raw stuff and sashimi became one of my favorites. Still, whenever I dined out with family and friends, the choices would be the usual Filipino, Chinese, Italian (pizza and pasta) and a few times, Japanese. When I started reading food blogs last year, I realized my taste buds were missing out on a plethora of flavors offered by food specialties from other countries. I learned that so many restaurants have mushroomed around the metro, offering various Asian, Latin American and European dishes. I don't really go out and around the metro that much, you see, and the only places we frequent are the two SM Malls near our home in Manila which are the San Lazaro and Sta. Mesa branches. One of such restaurants that I've often read about is the current casual dining craze in Singapore called Toast Box, which immediately caught my fancy because of its unique concept. Who would have thought that toasted bread could become huge money makers, right? Seeing the menu on the Internet, I knew it was high time I tried Laksa, which is probably Singapore's version of our very own Chicken or Beef Mami or even Lomi. Also on the menu are other Asian specialty dishes that include Hainanese Chicken and Nasi Goreng. I love spicy soup so I thought I'd have to taste Laksa. So when I finally had the chance to bring myself and my eldest child to Trinoma after picking up our organic veggies from the Quezon City Memorial Circle, we went straight to Toast Box.
In the Trinoma branch, Toast Box shares space with its sister-food firm Bread Talk. The interiors are clean and simple, the wooden tables and chairs awashed in white paint. The lady at the counter was cheery and accommodating with my questions, me being a first-timer here. I asked what the barley drink was and she explained that it was a cereal drink quite comparable to Nesvita. I asked whether it was "masarap" (delicious) and she answered, "Yes, ma'am, masarap sya (it's delicious)." I was relieved because if she answered on the contrary, I would have to admonish her for being a disloyal employee. Haha! Minutes later, our orders arrived and these were:


The floss toast which was cut up in bite-sized pieces was good except that it was quite cold and lacked the crunchiness that I wanted. As for the soft-boiled eggs that were served with soy sauce and pepper, I knew exactly what to do with them, thanks to my fellow bloggers. :-) I cracked their shells at mid-point, poured the soupy eggs into the saucer, put some soy sauce and a dash of pepper, and mixed them altogether. Of course, had I not read that this was the way to eat eggs at Toast Box, I would have simply put a pinch of salt into it. Haha! My daughter who watched what I did with the eggs with eyes wide open, was suspicious of how they would taste but when she took a spoonful, she was reassured and almost finished everything even before I could try it. The "little" problem came with the Laksa, though. My daughter didn't like it. Me, I wasn't sure. I took spoonfuls and could go on because I liked its spiciness. But half of me knew I wasn't prepared for the somewhat strange combination of curry and coconut milk. I guess I was not ready for introduction to this Asian dish that is loved by many in Singapore, Malaysia and Indonesia, and was quite disappointed with myself. I thought I'd already developed an adventurous palate. Thankfully, the coffee that is called Kopi here, saved the day for me. Just by looking at my cup, I knew I was about to have something different from what I usually had. It's thick, almost like hot chocolate in appearance. I took a sip. It was full-bodied but didn't come too strong. I was happy with my cup of joe. I also tried and liked my daughter's drink, the cold barley, which had a nice, mild milky taste. So, will I come back to Toast Box? Well, yes, to try their Hainanese Chicken, the taste of which I already have an inkling as I remember the White Chicken from Peacock Restaurant.