Sometimes, it pays to eavesdrop. Hehe. Last Saturday, my eldest daughter and her beau were talking about their day's 'itinerary' over breakfast when I heard about 'Zark's'. "What???You're eating at Zark's today?" I blurted out, my eyes sparkling with excitement, I was sure. In about three hours, they were there - at Zark's Burgers on Taft Ave. - with me. Haha! My other daughter and I had long planned to eat there on a Saturday before worship but due to her busy schedule at church, we haven't done so. The planning started after I read how big Zark's burgers were a few months back. My eyes widened seeing pictures of their Jawbreaker and Tombstone burgers which to me were really heart attack in between a sliced bun. Haha! They're that big! No, tall. Hehe. Anyway, thanks to my eldest daughter and her sweetie for tagging along mom to the first leg of their date (They went to Star City afterward without mom already, but of course. Hehe).
But arriving at Zark's which is front of De La Salle University, I was shocked to see the long line outside! Good thing there were chairs all around and nobody needed to stand up in wait. But I came close to deciding to leave and just eat somewhere else because I was already having hunger pangs. But..oh well..sayang naman, I thought. This was my chance already so I persevered..even if it took some 30 minutes before we were finally called inside. Whew! Talk about pain before pleasure. Oh well..pleasure it was, yes, to finally be eating the burger
of my dreams. Hehehe.


We enjoyed our burgers to the hilt! The patties were thick and juicy with a balance of flavors. My American All Star burger, as described in the menu, is classic bacon cheeseburger. My daughter's Black Mamba is cheeseburger 'in a bed of fresh lettuce, tomato, sauteed mushroom and caramelized onions then topped with a special rum sauce' that tasted like barbecue sauce to me. My daughter's beau's Zark's Ultimate Burger has cheese sauce, fresh veggies and topped with sauteed mushroom and bacon. Mustard added to our extreme burger bliss. All our burgers were 1/4 pounders, by the way.
But before we had these, we whetted our appetite (as if there was a need for that. hehe) with nachos and bacon in a cheesy sauce. It was so good and the serving was huge it almost made me full with little room left for my burger. By the way, we added just P25 each to make our burger come with fries and a glass of iced tea. I didn't like Zark's fries, though. They were soft and bland. Anyway, I wasn't able to eat all of my burger but my two companions 'labored' to finish everything so that they they both felt full to the brim and wanted to sleep after eating. Haha! So, this was the feeling of everyone after eating at Zark's, probably the reason there's a small 'lying-in' area over at one side of the restaurant. No kidding! Hehe. Still, we cared for some dessert and so we had Deep-Fried Mars which is really fried battered Mars chocolate served with vanilla ice cream on top and drizzled
with chocolate sauce.
It was an unforgettable experience eating at Zark's with their really big and delicious burgers and kind-to-the-pocket prices. I was bragging about this to my hubby when he got home from work that Saturday. I knew he was envious but tried to look unperturbed. Hehe.
I wish to be back there to try their other offers such as their buffalo wings and fish 'n chips.  See you there!
P.S. There a Zark's Burgers branch in Katipunan Ave. in Quezon City and another in BF Homes, Paranaque.
Posted by Lori P. at 11:36 PM No comments:

Bread may just be bread - good to eat and available just about anywhere. But if you come to think of it, bread is something so interesting. According to Wikipedia, bread is one of the world's oldest foods. Reading this, the Holy Bible came to my mind. During our Lord Jesus Christ's earthly life, He ate bread. One of the great miracles He performed even involved bread. Remember the "Feeding of the 5,000" where that great number of Jesus' followers were fed after the Lord prayed over just five loaves of bread and two fish? Even in the Old Testament, God's chosen people, the Israelites, ate bread.  When there was drought, God told the prophet Elijah to hide himself near a brook east of the Jordan and said He had commanded birds to supply him with food. And so the prophet did as he was told by the Lord and ravens brought him meat and bread morning and night. What an amazing story!
Fast forward to the present, here in our part of the world, bread has become wildly popular, so much so that even bakeshops from other countries are doing brisk business here. Notable are the "invasion" of BreadTalk from Singapore, Bread Story from Kuala Lumpur, Malaysia,  and Tous les Jours from Guri, South Korea. These are in addition to the good old specialty bakeries that have been existing here for years - The French Baker
and Le Coeur de France, among others.
Meanwhile, you ought not to forget our very own Pan de Manila where one can get pandesal - the true blue Pinoy bread - hot and fresh anytime of the day. With bakeries all around, Could it be that bread is soon to take over as the Filipinos' staple food in place of rice? In urban areas, possibly. And why not? Bread is perhaps the most versatile food in the world. One can have it for breakfast, lunch or dinner. You can eat it on its own or put all sorts of things in it to make it a sandwich. Bakers make bread using various types of flour such as wheat, rye, barley malt and cassava, and put in a lot of different ingredients such as fruits and meat, so that breads come in all sorts of shapes, colors and flavors. Hmm..lovely.
And there is possibly a thousand varieties of bread the whole world over. Personally,  I love bread, too. It's perfect for breakfast, paired with a strong cup of brewed coffee. My hubby loves bringing home bread as pasalubong. When he does, the kids and I either eat it at breakfast or take it as baon to school or office the next day. Sometimes, I take home bread too. When it's from Pan de Manila, Le Coeur de France or French Baker, the kids know I brought it. When bread's from BreadTalk or Pan de Amerikana, they're sure it's from dad. 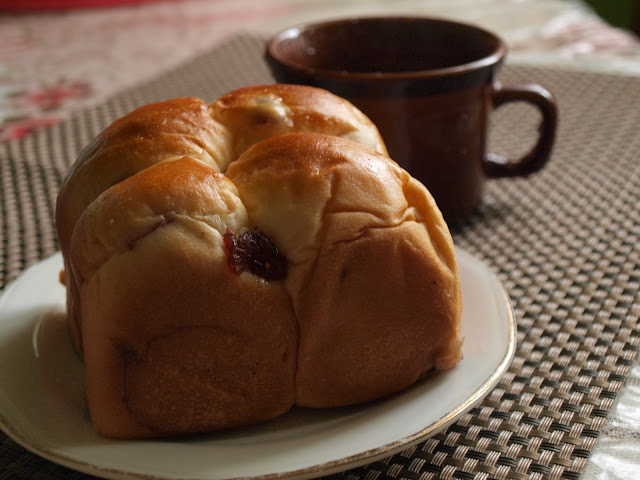